I read an article on Yahoo! Food the other day about Secret Menus, and how many restaurants have secret menus and not so secret menus.  It spoke on the evolution of those menus and the franchises that have pulled them off brilliantly (In-and-Out Burger) and those that have failed dismally (Panera).  It was interesting; however, my favorite part of the article was the social impact that secret menus have and why they have such a strong appeal to Generation X.

In the middle of Generation X, we were thought to be slackers, flannel wearing coffee drinkers… and well, while that is true, studies have shown that we are the most education, the most focused on family, and we have the highest percentage of voters and volunteers.  Gen X’ers played the first video game, we are the masters at creating the perfect mix tape and we value honesty and fairness. 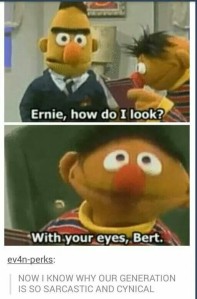 Brian Wansink, author of Slim By Design and founder of Cornell’s Food and Brand Lab, which studies consumer behavior related to food, agrees that people have a psychological draw to secret menus. “Some people really value fine dining because they feel like they’re part of an exclusive club,” Wansink says. These hard-to-get (or afford) experiences are a symbol of that person’s uniqueness. “The secret menu does that,” Wansink says, “but it’s a whole lot cheaper to spend eight dollars on a burger than it is to join the Philadelphia Country Club.” Though secret menus can appeal to people in any age group, Wansink sees it as a “Generation X Thing,” adding: “They’ve been told all their life that they’re unique. This is one way of reinforcing that.”

It’s an interesting article, but you follow that up and realize that Generation Y is in the work force now and Millennials dominant traits are those of narcissism and a sense of entitlement. 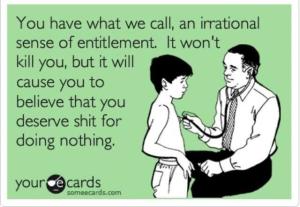 Alas, all hope is not lost as we get to the point of the blog post today.  James Harrison. 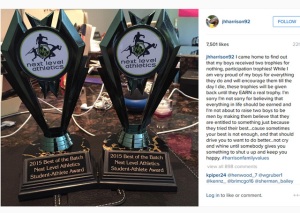 I came home to find out that my boys received two trophies for nothing, participation trophies! While I am very proud of my boys for everything they do and will encourage them till the day I die, these trophies will be given back until they EARN a real trophy. I’m sorry I’m not sorry for believing that everything in life should be earned and I’m not about to raise two boys to be men by making them believe that they are entitled to something just because they tried their best…cause sometimes your best is not enough, and that should drive you to want to do better…not cry and whine until somebody gives you something to shut u up and keep you happy. #harrisonfamilyvalues

What do you think? Are “secret menus” an exclusive club? Should we have participation trophies? I’m not sure what the answer is, all I know is that I’m looking forward to the day what I get to be the one saying “In my day, we had to walk to school.  Up hill.  Both Ways. With no shoes.  In snow.”