I remember when Black Friday meant getting up at 3 am and being in line by 4 am so that you could get the goodie bag the store was giving out.  Filled will all kinds of swag to make my 19 year old heart swoon.

Snow globe ornament with your logo bigger than the ornament itself? I’ll take it! So worth standing in line for.  My tree is 3′ tall – it doesn’t even have a tree stand, you fill the base with water so it doesn’t tip over and put it in a planter!

English tea? Of course I’ll take that sample! Never mind that I don’t even drink tea, it was free!

Coupons galore? Load me up, I’ve lived on cereal this past week.

Fast Forward 5-10 years and those goodie bags faded from existence and were replaced with MASSIVE DEALS.  Flat screen TV only $99!!! 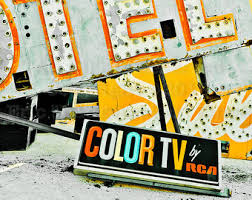 I got mine out of the return pile, because what most people didn’t realize was, the screen WAS flat, but it was still a tube TV.  (I think that was the start of deceptive advertising!)

Fast forward another 5 years and I’ve come to realize that I love a good bargain, but I have to really, really love it in order to stand out in the cold waiting to get in the store!

A few years ago I did, with my brother Lee, because he wanted to get everyone a gift but had a very tight budget.  But let me tell you, we divided and conquered at Target and he did score some amazing deals!  Even I was impressed!

My son and nephew have wanted to experience the thrill of Black Friday, so I’ve gotten up early for them and taken them out and around.  And we stopped by 7-Eleven on the way home, had them make us a fresh pizza, and ate pizza at 5 am and went back to bed!

So, there are some great memories associated with Black Friday.  But, it’s not really the shopping or the deals, it’s the time spent with family.  It’s the times we walk into Kohl’s and I immediately go stand in the check out line, which is wound all the way around to the back of the store, and my mom and sister one by one bring me a cart and then fill it with their purchases, and then take my place so I can so scour the store!  (We have since learned that it’s best to hit Kohl’s after lunch, after the crowd has died down!) It’s spending time laughing with my siblings, and teaching our kids fiscal responsibility comes in all forms.

It’s also the times I get to stand up and say “Yes, I was one of the crazies in that line.  And you know what, it was pretty awesome!”

It’s also been the times that we’ve bought so much we weren’t sure if the back of mom’s car was going to close.  I think cokes and pillows were on sale that year, add in the popcorn machine, well, things were getting tight!

It’s pouring over the ads in the Thanksgiving paper while we are cooking the meal and the Littles are running around  underfoot.

The Littles – both in my lap discovering the joy of seeing yourself on camera! 🙂

It’s the tossing of the ads back and forth trying to figure out what to get my grandmother.  “Do you think she’ll like this?  What about this?” and the occasional “Do we have to get her something? Didn’t we get her a gift last year?  That should cover it, right?”

No, we never really say that!

No one show my grandmother this post, okay?  Thanks!

So yes, I’ve been part of Black Friday madness, and I’m sure I will be again.  Having been on the retail side, I’ve had to work late the Wednesday night before setting everything up, and I’ve been up well before the sun to get to the store.  So, I’ve been there.  I needed and wanted a job, I was willing to make that sacrifice.  And I’m not here to debate the open on Thanksgiving or not issue.

Because you know what?

And I have the most beautiful tree in the world to show for it!  No regrets!

Having admitted that, I’ll also admit that this was many, many years ago, back when the stores were actually still closed on Thanksgiving Day, but one retailer broke the mold that year and opened Thanksgiving Day afternoon, and my cohort, which may or may not have been my mother, told me “Move fast so the TV camera’s don’t catch us, I don’t want anyone to know I was shopping on Thanksgiving Day!”

I was tagged by Mother’s Little Steps to participate in a quick Q&A – and well, I can’t say no!

1.  When and why did you start blogging?

Peer pressure!  Several of my friends are/were bloggers and as I was reading theirs, I felt left out!  Seriously, it looked like they were having fun and I was missing out – thus Did That Just Happen Blog was born!

2. Is there any reason behind you blog’s name?

Pretty much the title of my blog sums up my life.  Wait until I tell you what happened at Walmart this weekend! They had Advent calendars out, the cheap $2 ones where you get a little piece of chocolate each day, and they had Micky, traditional Santa, and Disney Princesses.  Guess which one we have?  Go ahead, guess!  Guess which advent calendar will be gracing my counter top the entire month of December because Mr. T acted like a perfect 4 year old kid and threw probably the best tantrum in the world!

Mr. T: I want the Princesses

Me:  You don’t need the Princesses

Mr. T: I WANT the Princesses.

Me: You don’t need the Princesses, let’s get Santa

Mr. T: I WANT the PRINCESSES

Me: FINE! You can have the Princesses!!

He acted like a perfect 4 year old and I pretty much pulled of the perfect stressed and harried mom of a 4 year old that has a voice that keeps raising in pitch and volume! 🙂  We did get some strange looks – but yeah, that happened.

3. If there’s one thing you dislike about blogging, what would it be?

The pressure to produce.  All of the articles about growing your blog, increasing your stats, and getting more views.  I love to blog; however, there are times when I see those articles (or when I read them) I start feeling pressure to grow and expand.  But, I don’t want that to be my focus.  My focus is sharing part of my world and connecting with other bloggers.  I’ve met such wonderful people and had some amazing conversations – and that is what I want to focus on – doing what I love!

4.  Have you ever thought of quitting your blog?

Totally! I think we all have at one point or another.  If I am going to blog, I want it to be genuine and sincere.  As such, I can’t have a blogging schedule – it would be too forced!

5.  Have any nasty trolls visited your blog and left comments?  Care to share them?

Now, who could leave a nasty comment on my blog?  🙂  I’m kidding – I haven’t noticed any trolls, but that is one of the benefits of a small blog, the trolls don’t notice me!

6.  Have you written any controversial blog-posts?

I have! It wasn’t really on purpose, as I’m not a very controversial person, but I did write one that stirred up some controversy and lots of discussion.  No, I won’t tell you which one it was!

7.  Have you ever experienced losing your blogging-mojo? How did you get it back?

Not as much anymore! As I’ve tried to be more organic in my blog, it’s been easier to write! There are times that I have to live my life and I fall behind on blogging, but I’ve learned to be okay with that, and my mojo comes right back! 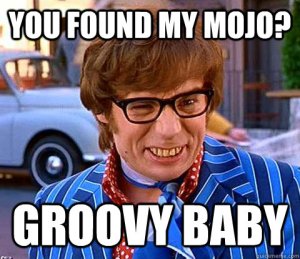 Thanks Dean! That was fun!

Below are the 7 I am tagging – because you have been great commentators on my blog and should be rewarded!  Below are my 7 questions for you – grab them and go do a Q&A of your own!

Holly at Surviving the Madhouse

Me, Myself and Kids

My Year(s) of Sweat

Mr. T finished his latest performance in theater this week.  Attack of the Muffin Man was written and directed by their assistant director, and I have to say, it was quite brilliant!

Due to his Mascot schedule Mr. T took a smaller part than normal, but he knocked it out of the park!

I sent a text to a friend of mine with pictures from one of the performances.

He looks really into it.

I hope Mr. T looks really into it!  That’s what was supposed to be happening!

But, my sarcastic comment aside, it is actually a compliment when someone makes a statement like that – it means that Mr. T is doing his job and he is fully immersed in his role!

Now for your viewing pleasure! 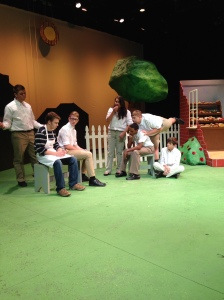 There was story time 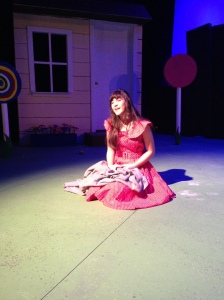 And there was dancing!

There was even an (almost) dead man walking!

And then there were the fun pictures afterwards 🙂 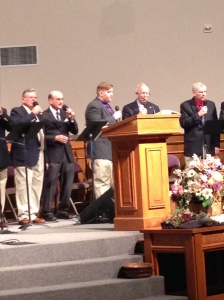 For #MCM (Man Crush Monday) Mr. T’s girlfriend posted, “If we could all just take a minute to appreciate how wonderful this man is, that would be amazing.  So proud of him in everything he does, from singing at church, to mascotting at school, to being involved in the school play.”

So, they aren’t my words, but she sums up my Wordless Wednesday perfectly!

Yet again, this applies!!

Did That Just Happen Blog

I am seeing these posts all over the place.

All of these tips and tricks for the leftover Halloween candy.  Make a Christmas advent calendar with the candy.  Toss it all inside a pie crust and make an insane chocolate/caramel/nut/pretzel/dots pie.  Halloween bark.  Halloween popcorn.  The ideas are endless!  Apparently even the Elf on the Shelf tends to get in on the action.

All of those great ideas and I’m all:

WHAT LEFT OVER HALLOWEEN CANDY???