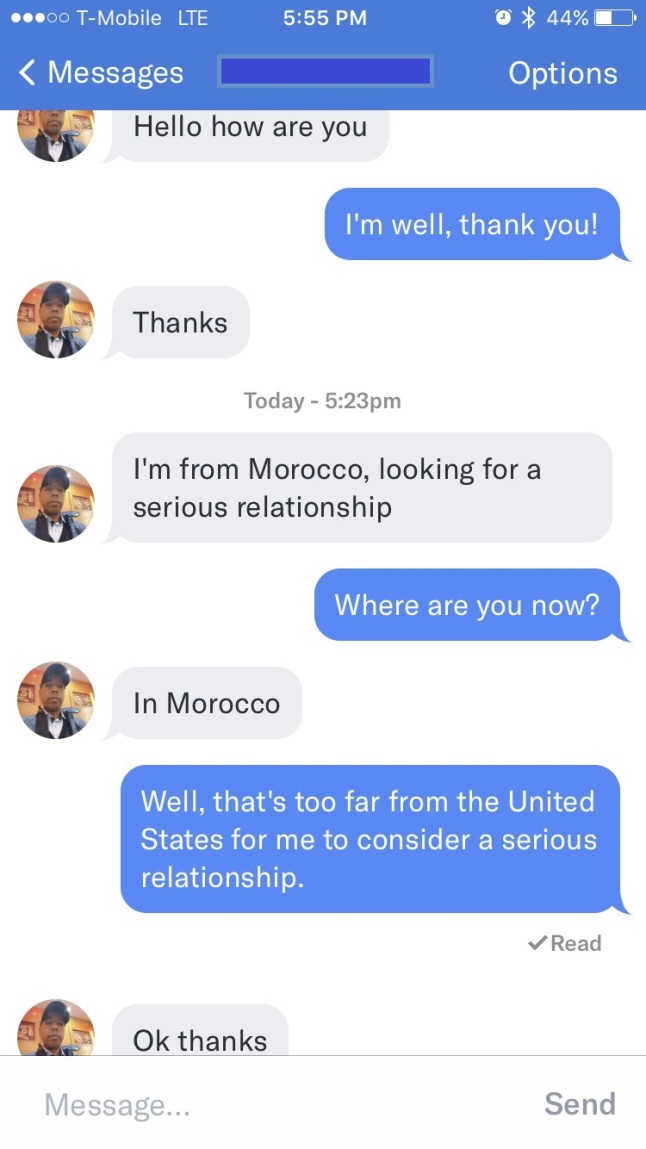 And welcome to my reality…

You’re from Morocco… that’s nice, thanks for letting me know where you are from.  What I care about is where you are now, though.  Oh, still in Morocco?  Yeah, no.

Now, I have messaged back and forth with some nice guys – a few have asked me out and I’ve been tempted, but it just wasn’t right.  And there are a few that we are working towards friendship… well, a friendship that will last until I cancel my account!  Which is coming.  Soon.  Very soon…

Not bad as opening lines go – but again, yeah, no.

I texted Adam about this one. 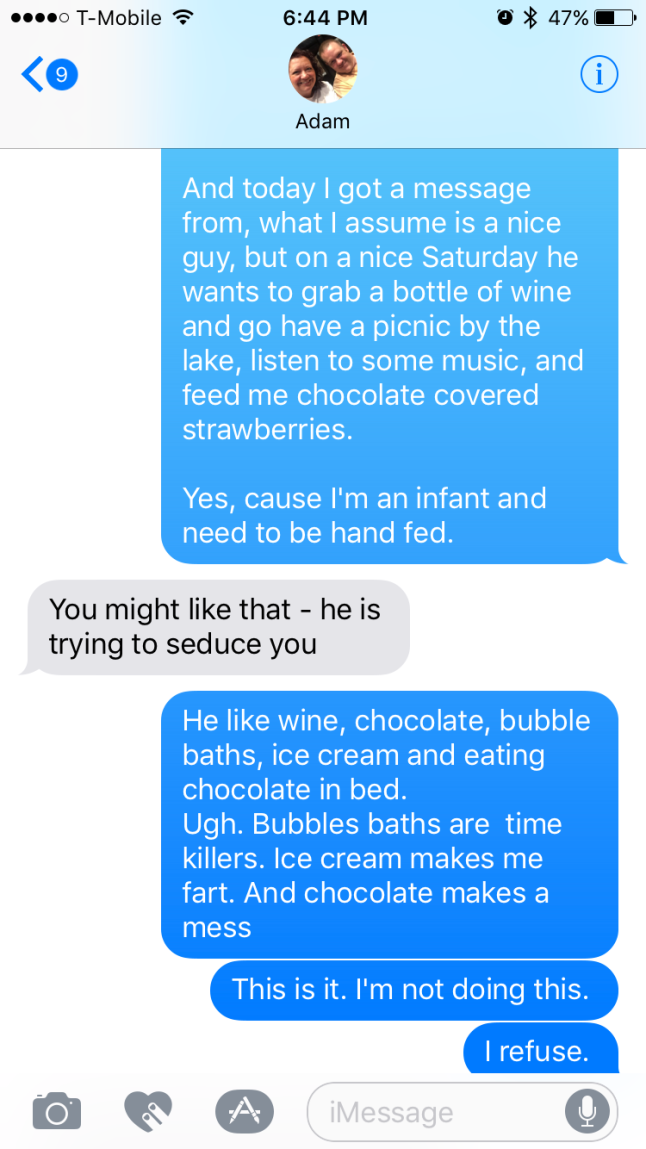 So, seduction guy, guys, I did actually try. He had mentioned lunch time fishing during our picnic at the lake (while he’s feeding me chocolate covered strawberries apparently) and so I messaged back that fishing at lunch time probably wasn’t going to catch us much, we should go in the morning time.  I added some more stuff, you know, making general conversation.  He came back with another laid back, laying around, relaxing and doing nothing type of message.  So, I asked him if he ever actually did anything.  He had two boys, but was always talking about just laying around the lake, or the beach and just listening to music and picnics.  Did he actually ever do activities? I told him that I was running a 5k that weekend and then going over to a friends house to help out, and then I gave him an idea of my next couple of weekends, which were pretty busy – I told him that was what I was use to, I liked to be out “doing” things.  Relaxing was fine, but just not every weekend!

Thanks to Kerry I am participating in the A Day in the Life!  You can read all about it by clicking on the link.

The alarm went off at 3:00 am this morning.  Two snooze buttons later I was up and brushing my teeth and jumping in the shower.  3:35 I was out the door.  My friend Melissa has been staying with me for a week and a half and I had to get her to the airport this morning and we were both pleasantly surprised at how little traffic is out that early in the morning!  I made it to the airport in record time.

I got back home and seriously considered going into work early.  I mean way early.  Imagine how much I could get accomplished!

Then I heard my bed calling my name in a loving tone, like a siren calling Homer to the craggy beach shore.

A couple hours later I crawled out of bed, again.  I made a cup of coffee and checked on Mr. T, who assured me he was eventually getting up before I settled down to work.   An hour later we said our “good-bye, I love you, have a great days” to each other and I debated a second cup of coffee.  The fact that it is Day 2 of Week 4 of C25k had me switching back to water.  All I could picture was the caffeine getting me going and then doing my training and my heart literally exploding.  With that image in mind, water was an easy choice.

Alas, an hour later I was on the torture machine, ear buds in and music blaring.

31-1/2 minutes later I was dying.  I almost curled up in a ball on the bed sobbing; however, I didn’t want to get the bed wet with salt water – because between the sweat and the tears, well… it wasn’t pretty.  I sat and sent a text to a friend “I’m going to have to redo week 4, Today was awful.  I can’t jog.  I can either breathe OR hold in my abs, but apparently I can’t do both.  I only made it 4.5 miles and had to walk 3 of the last 5 minutes.”

His response:  “yeah sounds good.  Keep it up.”

Fast forward through oatmeal, emails, quick scan of the blogosphere and some technical writing.

Then I bit the bullet and called my boss.  We had a long talk as he had mouthed off to me in an email the night before, one of those quick, catty and aimed to hurt remarks.  I in turn felt smoke coming out of my ears when I read it and took time in answering the email.  I addressed the other questions first, and then let him know that I found his remark rude, hurtful and completely inaccurate, and then listed a prime example disputing his comment in the original email.  We cleared the air – and as long as I had him talking, we discussed the mess of his that I spent most of Monday cleaning up.  By the end of that conversation stream he was back on the same page as me and sadly, we were exactly where we were 6 months ago.

An hour and 20 minutes later I was able to hang up.  During that call we did resolve several items, I sent multiple emails and got the dishwasher half way unloaded!  I chained myself to my computer and sat down to work on a project until 2:00 pm when I had to take a break.  I had to run a box and a watch up to T at school (I have no idea… he sent a text asking for the items and sometimes, it’s just better not to ask!) and as long as I was getting out I figured I’d swing by my neighborhood 7-Eleven and grab a slice of pizza.  It wasn’t until I was walking into T’s school, and I caught a glimpse of myself in the reflection of the glass doors, that I realized I was still in my workout pants.  Yoga capri pants.  Yup… that’s what I walked out of the house wearing.  All I could think was how happy I was Stacy and Clinton had retired and there wasn’t a chance of secret footage being filmed for “What Not To Wear”.

Back home and back to work at 3 pm.  I need to focus for one more hour, but I can’t, all I can think about is how far behind I am at work, and more importantly – for my annual Halloween party this weekend!!  I don’t have my menu finalized, and without that I can’t put together my shopping list – and I need to go shopping.  I need to prep, I need to clean so I can get all of my supplies out and make sure I’m not missing anything – and I NEED A PINATA!!!  I don’t have time to go get a pinata!!

Do you know how hard it is to do technical writing when all I can think about is my pinata? Oh – and the fact that I forgot to get anything out for supper.  I’m praying that God performs a fishes and loaves miracle in my fridge and when I open it I will have plenty of food to feed me and T dinner.

Well – I’m at my word count – so here is where I leave you!  I promise I’ll get more work done (doubtful) and the rest of the dishes unloaded (doable).  Mr. T and I will have supper (as long as a miracle happens) and we will do homework, play on our phones and hopefully watch the episode of Supernatural we missed last night!

That’s a day in my life!  Thanks Kerry!