I love Halloween!  I know, you are all surprised to hear that, but it is true!

Today I want to share this totally awesome tip I have for carving fake pumpkins – it will change your life.

I love carving pumpkins!  Every time I see a Pumpkin Masters book, especially when on sale, I grab it! They have awesome templates that range from super easy to the insane I would never attempt to do on my own!

We used to get real pumpkins and carve them, and sometimes I still do; however, I’m in love with the fake pumpkins!  I can carve them and then bring them out year after year.  I like to pick them up once they go on sale but I have been known to pay full price (well, okay, I always have a coupon!).  I did pick one up this year with my 40% off coupon but while I was shopping I found the most amazing gadget! 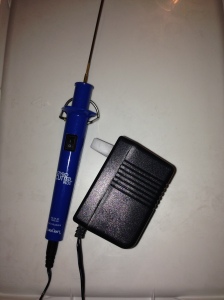 It’s called a Styro Cutter.  This little gadget is a thin wand that heats up. It is meant to be used on Styrofoam – wreaths, decorations, etc. but I have discovered that it works well on fake pumpkins, too!  This is awesome!  So, you tape your pattern onto the pumpkin, use the little tool that comes with the Pumpkin Masters kits to poke the tiny holes to create the outline and then you plug in the styro cutter.  Within minutes you will be engrossed in creating masterpieces!  Once the knife is hot you slide it into the pumpkin and then slowly work your way around doing a grown up version of connect the dots.

There are several reasons why I love this, first off – this little wand replaces all of the serrated blades that have the tiniest handles in the world!  Don’t get me wrong, those blades are awesome and do work, but I love not having to switch between the different tools. 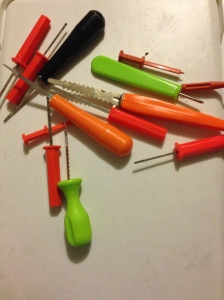 Secondly, the mess is minimal!  Before, there would be tons of orange shavings all over the place – but now, the orange foam shavings are minimal, I collect them in my hand and toss!  If you know me, then you know that I don’t like messy, so the fact that this minimized the mess makes it worth it.

Lastly, this cuts the carving time in half.  Since I don’t have to switch serrated blades and don’t have to stop to give my hand a rest, the time it took to make my pumpkin went by in a flash!  Mr. T had fun helping, too, which makes it even more fun for me!

This year the pumpkin we carved was double sided.  The front is a witch with a bubbling cauldron and when lit, it casts the outline of a couple of ghosts on the wall dancing behind the witch.  It is super awesome!!!

Back – and these ghosts dance on the wall behind the witch!

Not a good picture, but the one on the right we did last year… by hand… with the small serrated blades. Trust me, the hot knife makes carving so much easier! (The one on the left was pre-purchased like that, I can’t take credit!)

Along these lines – Penney at My Journey to Live an Authentic Life sent me this pin the other day… Do you remember how much I love baby showers?

The look of my blog is a bit different – I can’t help it, I am so ready for Halloween.  The other day we spilled something on the tablecloth, and I took it off to wash – and I was so very tempted to go ahead and put up the Halloween tablescape! I haven’t yet, but I also haven’t ruled it out!

Every year I decorate for Halloween – and I mean decorate! I have actually paired down the decorations, but it’s still pretty darn awesome when you walk into my house!  I have a spooky monster that greats you in the living room.

Here he is posing with Joshua last year.  Yes, that is a witches cauldron bubbling in the background.  And if you look closely, an apparition has appeared in the mirror.

Mr. T and I live with the decorations all month long – and yes, there are times that spooky monster, or, as I like to call him, George, will scare us when we walk in the room and forget he is there!

I have a graveyard that I set up in front of the fire place, an old man hanging in a cage in the corner and T’s bathroom was apparently the site of a grizzly murder as there is blood spatter and bloody hand prints all over the place! 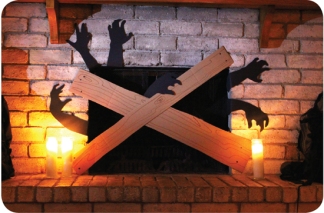 I think I could do this! It would look great as a backdrop to my graveyard!

The highlight of the season is the fact that I’m blessed to be able to throw the annual Halloween party for all my friends!  The day before I take off work and crank up the oven!  I like to make treats and eats!  I always have some type of main course and half a dozen sides, and all my friends bring something to toss on the table to share.

We have brains – in both red and blue – a bucket of poison and even some veggies for the non-zombies in the group!

Most importantly, we get to dress up!! I love costumes, always have! Every year, going way back to my teenage years, I’ve dressed up to hand out candy, so I get super excited when it’s time to pick a costume for Halloween!  I don’t mind spending time or money on them, as I reuse them over and over again – and having said that, I think that this year I have to buy a new tub to hold the costumes… or go hang them up in the spare room closet!

I love that I have friends who get into the spirit of things – they aren’t fuddy-duddy’s who won’t play along – they enjoy participating and it makes the night and the memories even more special!  (yes, there are a few that don’t play along and show up wearing a shirt that says “this is my costume”, but that’s okay – they just don’t get to take a whack at the pinata!) 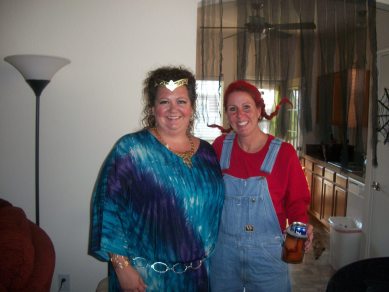 Queen of Atlantis and Pippy Longstocking (2011) 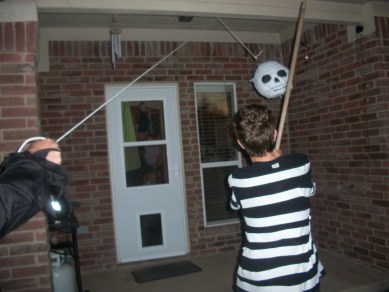 Pinata Time! (PS, I put down a big patch of astro turf on the grass under the pinata, that way, once it is busted open, it is easier to gather the goodies and nothing gets lot that Shorty could choke on or get sick eating) (2011)

George, Gypsy, nun and do you remember those Barbie heads? You could brush the hair and put make up on them? That had to be the most inspired costume of the bunch – there was even make up on her tray! (2012)

So, tell me – don’t you just love Halloween?