You know what is my favorite key on the computer?

This guy is amazing.  He is my refresh key.  And as of Friday night, he is my friend!

Let me back up.

Last year, the most awesome kid in the world became the very first Mascot of the new High School.

And, he rocked it!

Not that I’m biased or anything!

Mr. T also ended up joining the competition cheer team – even though he’s never cheered or stunted a day in his life. 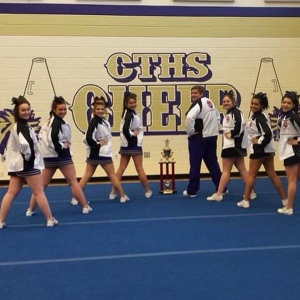 He did great! He made major improvements and, he found a passion.

This kid has loved being a cheerleader.

It has been so neat to watch him grow and change along this journey.  To see him realize that seemingly small decisions can have long reaching consequences and making changes in his life so that he can follow his passion has been amazing for me as his mother.

He decided over the summer that he wasn’t going to tryout to be the Mascot for his senior year.

He was going to try out for the Varsity Cheer Squad.

And this kid worked for it.

Friday after school they had tryouts.

Now, the girls all try out, and then the judges review the scores.  The judges leave and after they’ve left the property the girls are then released to go home and the Coach goes to her office to post the results on line.

All of the girls went home and sat by their phone/computer/ipad and they kept hitting refresh.

Mr. T walked across campus because he had a theater UIL performance to give!

I started seeing pictures on Facebook of other cheer moms posting their daughters staring intently at their phones… so I started hitting F5 every 1 minute!

Oh, the page now had headers!

And then the moment I had been waiting for, and wearing out the F5 button on my computer for, had finally arrived…

My heart was overflowing with love and pride – and I grabbed my phone and texted Mr. T so he’d see it as soon as he was out of theatre, and then my friends and family that had been waiting – probably not on as many pins and needles as me, but waiting nonetheless!

When he got home that night, he was so pleased and in his own understated way mentioned how happy he was, and how glad he was that his hard work had paid off!  He mentioned that he really felt he worked hard and practiced hard, and it was nice to make the team as a reward for all of that effort.

Me? I was doing my own cartwheels!

In my head at least!

So, yeah, that happened.  I’m still a #CheerMom and will be sharing plenty #CheerIsLife posts during his Senior year! 🙂

39 thoughts on “How Many Times Can You Hit Refresh?”