And the Winner is NancyTex! Mr. T said that your Tweet made him laugh!

It’s giveaway time here at Did That Just Happen Blog!  I have a $5 Best Buy gift card that was “free with purchase” that I’ve failed to use the last two times I’ve been back to Best Buy – so I figure it’s a sign that it is time to pass it on! Since I’ve never done this before, the rules and contest will be simple!

The first rule is that I have to be able to mail this to you.

It’s no secret that I’m in love with all of you and the community that has been created in my computer!  Just yesterday, I was talking to Ort of Sorts on WP about clean eating, and I mentioned that she had probably seen on Pinterest that I’ve recently decided to try a homemade pizza (which is a nice way of stating that I flooded my feed with about a dozen different pizza and pizza dough recipes!) and she offered to re-post her homemade pizza dough recipe for me!

Score!  I can’t wait to try this – and I highly recommend you check out her blog! She provides such great food inspiration!

The second rule of the give away is that you have to pick a post of mine and tweet it – and – this is the best part – hashtag it ILoveKate.  Yeah, totally self-centered, I know, but Mr. T and I were in the car trying to come up with a contest, and we decided on Twitter, and then needed a hashtag so that we would be able to go back and find your lovely tweets.  Thus, #ILoveKate was born.  You can go one step further and tweet me @KateandMrT, but it won’t win you any bonus points! 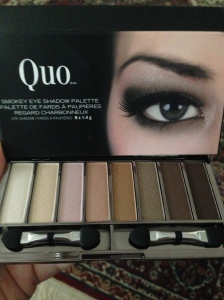 But look what I won!  I opened the mail box this week and I had a package!  I had won this eye shadow kit from My Hole in the Head, and while I’m a make up fiend, it was also the inspiration to host my own giveaway!

I love getting things in the mail, and now I want to share that joy with you!

The third rule is that Mr. T gets to pick the winner.  I know that I would have a hard time being fair and objective because I love you all so much! So, Mr. T will search the hashtag and since he doesn’t know you guys, he’ll pick the winning tweet.

You’ll see that there is no limit to the amount of times you can enter – Mr. T will go through every post with the #ILoveKate hashtag and make sure it has a link back to a blog post.

Good luck to you all!