I’ve been a single mother for 15 years now and I’ve really enjoyed it; however, there are times that I wonder about how others did it.

How did other single mothers take their kid out to dinner?

I clearly remember several times that Mr. T and I went out to dinner when he was younger.  The worst part was when he had to pee.  He was too young to go by himself, so I would take him.

While that could be an adventure, that’s not the bad part.

The bad part would be when I got back to the table and our table had been cleared.  Some bus boys were really excited about doing their job!  I tried to leave signs that we were coming back… but when I refuse to leave my purse or phone behind to be stolen, well, there isn’t much left!

Most of the time our meal was either remade or comp’d.  Once, we went potty and I got back and fresh plates were already waiting on us!  The waiter didn’t stop the bus boy in time and so he went ahead and put in a fresh order for us!

I think I should invent a placard.  A plastic tent that can be tossed in the diaper bag and pulled out when you have to take your kid to the potty – “I’m coming right back! Potty break!”  Do you think it would work?  Am I the only one that ever had this issue? 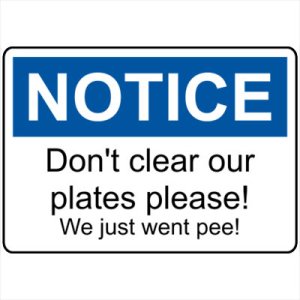