I picked Mr. T up from theatre rehearsal last night and he was limping a bit – and several of the cast members yelled into the car as T was putting up his backpack and then getting in “He really hurt his toe.”  “It might be broken”  “It bled all over the place!!”  “We didn’t think that it would ever stop!!”

If I was a normal parent, I might have been alarmed; however, you know I’m not normal.

Here’s what happened:  Mr. T can do the splits.  He’s been able to do them for years.  In the latest play they are rehearsing, the director thinks it would be great if T could drop to the splits and pop right back up during one of the scenes.  No big deal getting down – but he’s been working on “popping right back up”.  Apparently yesterday he “popped” and miscalculated on the rise and didn’t get his foot under him properly and ended up landing on his toe.  Like landing ballerina style on his big toe.  Ballerina style.  On his big toe.

Best guess is that when he landed – ballerina style on his big toe – the toe went one way and the toenail went the other.  Kinda like “/\”.  I’m not surprised that he bled a lot with that kinda boo-boo!  The good news is that one of the student athletic trainers is also in theatre and she bandaged him up properly and gave him good instructions for taking care of it last night.

He needed to clean it last night so he got it all unwrapped and showed it to me.  Then he asked for pictures.  Then he asked me if I wanted to kiss it and make it better.

His response was “I thought that was what mom’s were supposed to do!  Kiss it and make it better!”

To which I replied “Not when it’s feet!”

That’s the new parenting rule – you don’t have to kiss and make it better when it’s feet!

If you are faint of heart – do not scroll down. 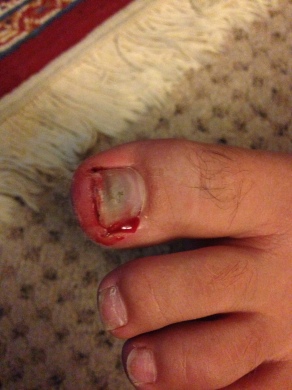