Twice a year my parents take the grand kids camping.  Normally the week between Christmas and New Year and one week during the summer.  This summer we weren’t sure if it was going to happen as our schedules have been insane; however, we worked it out and they went last week.

My sister was able to stay at the house the first couple of days, and that helped, as my parents have a huge fish tank and three dogs.  You’ve met the dogs before, as I posted about my experience watching them over the Christmas break (If you missed it, you can read Gone to the Dogs here).

Monday night my sister texted me about midnight.  Mom and dad’s neighbor had texted her, thinking she was still at the house and asked her to bring the dogs in the house – since they had been barking for 30 minutes and they weren’t getting any sleep.  So, I got out of bed, got dressed and drove over to my parents house intent on putting the dogs in their crates.  Only, their crates weren’t there.  They were gone, and in their place were just some dog beds.  Apparently my parents have stopped crating them at night and they dogs just sleep in their beds.

That’s all well and good, except I can’t find the crates.  So, if I’m up at midnight because of their dogs, I figure my parents won’t mind a phone call.  I call my dad, who sounded pretty lucid, so I figure he hadn’t been asleep long, and asked about the crates.  He told me where they were and did express the fact that he felt badly that I had to do all of this, and then he told me to just lock them in the study and close the doggie door.

First thing in the morning I was back over there to let them out.  This went on for several days, locking them in at night and then letting them out in the morning – and, to keep them company, I would stay over there for several hours each morning so they weren’t too lonely.  I’m just good that way! They got fed, they got attention and they had the run of the house and the yard during the day.  You’d think that would make for some happy dogs.

Then I walked in one afternoon to this:

The chair was blocking the hallway…

The chair AND the ottoman had both been moved by several feet.

My first thought was the house had been broken into.  But, no, all of the valuables where there.  So, I took the pictures and sent them to mom “Either you have a ghost or the dogs are rearranging furniture when I leave”

I put the chair back where it belonged, picked up the trash they had gotten into and went about my day.

Until that night when I walked in to lock them up and this was what I saw: 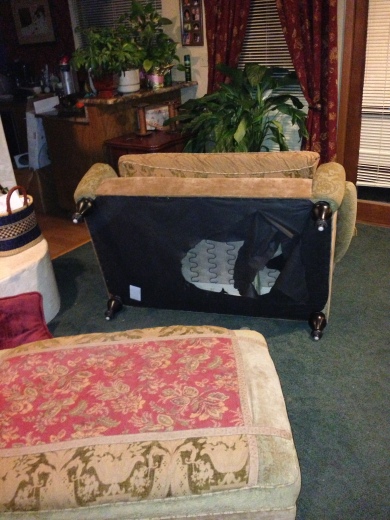 Now, I have no idea if the bottom of the chair was damaged before (as all of the dogs have played under that chair) or if they knocked it over and tore it apart.  All I know is that now the chair was knocked over.

At this point, I just resigned myself to the fact that these dogs were nuts and to not offer to ever watch the dogs again.  The next day my sister was coming back to town and I very happily washed my hands and left them in her possession!

For the record, my resolve not to watch the dogs ever again didn’t last long.  I will be going through all of this for a week in November.

12 thoughts on “Dog Days of Summer”