This weekend I had to attend a baby shower.  I say that I “had” to because it was a social obligation and I literally had to make myself get dressed and get out the door.  I really didn’t want to go.

Don’t let the cuteness of the invite fool you – it’s torture!

Reason 1:  I hate baby showers.  I hate bridal showers.  I just hate that stuff.  And, I’m telling you now, if it is an event with a lot of people bringing me presents, I will announce that I am not going to bore them and make them sit there while I open every single one, but that I really appreciate the time they took to celebrate with me – now let’s eat.  I don’t like being the center of attention and it is boring for everyone involved to sit there and have people watch you open presents – or as you sit and watch others.  I’d much rather we mingle and have fun! 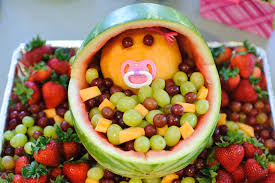 Thank goodness we didn’t have this – cause I wouldn’t be able to actually eat the baby’s innards. Really? Who does this stuff? I don’t want to eat what is portrayed as a baby!!

Reason 2:  The mother-to-be lied.  Now, this is a grey area.  They (the parents) wanted to do a “gender reveal” at the shower.  Which, fine, whatever makes you happy you should do; however, it makes it so much more difficult to shop when you don’t know the gender of the baby, and because of this, I cut my gift giving budget in half – and I only gave diapers and wipes.  But, here’s the deal.  When they were asked if they know the sex, they both said “no, we don’t know”.  We all knew they were lying.  Well, several of us knew they were lying.  Why did they have to lie?  Why couldn’t they say “Yes, we know, but we want to have a gender reveal shower and let everyone know at the same time – surprise everyone.”  And, if that was the case, then those of us that were buying gifts could have the option to buy a gift AFTER we knew the sex of the child.  Also, if they were going to do a gender reveal shower, then it should have been themed like that.  But, since the parents to be didn’t let the organizers know, then it couldn’t be planned as such.  I’ve seen tons of great ideas for a gender reveal shower, but instead of going for it and embracing it – they just lied.  (And they got a lot of clothes, but 90% were “boy” clothes).

Okay, I can get behind he or she themed items that involve chocolate!!

I am pleased to announce that I had a good attitude!  I chipped in, participated in the games (I didn’t win any, though – and I really tried!!) (But, one of my BFF’s was the host, and she had an extra gift left over because it took forever to open gifts and we decided the last game wasn’t needed and as I was leaving, I noticed that the extra gift was in my purse.  Oh yeah, my friends love me!) (I don’t think anyone else at the shower will read this, but if you were there, just disregard the previous sentence!)

Really? You want to display and then eat a cake that is a baby’s butt? Am I the only one that has issues with this??

So, non-optional social conventions aside (you’ll get this if you watch The Big Bang Theory!), it was a good weekend.  The baby shower didn’t suck, which is a huge compliment coming from me! My BFF and her mom did a great job putting it together, excellent food, wonderful punch and they kept it rolling right along.

Of course, the day before, when I was finally getting around to getting the gift, I texted my girlfriend “Is it wrong to put in the card “good luck raising this baby without shopping at Target or Walmart?'”  She laughed and said “yes”.  It’s not my fault that the mom to be only registered at a crazy place that is not common because “I don’t like Target or WalMart”  Uh huh.  You don’t like it, huh?  Let’s see how long that lasts before reality hits.

She’s having a girl, by the way… I know you were dying to find out.

But, the baby shower didn’t suck!