So, I got the thumbs down today. 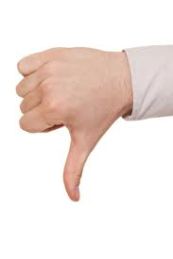 This isn’t the actual thumbs down I got – it’s a random Google thumb. Keep reading and you’ll see why…

Let me back up.

I was leaving for a work meeting, and pulling out of the subdivision that is connected to mine, to my left there were a couple of cop cars, one was sitting with his lights on and one was driving very slowly, they appeared to be searching for someone/something.  Fortunately, I was turning right!

I took off, and yes, I tend to push the limits of speed.  Technically, we don’t have speed limits here in Texas (totally true, look it up!); however, we do have speed limits signs, which are the posted speeds at which that road has been tested to be safe.  Just for the record, you don’t get out of a speeding ticket when you remind the judge that there aren’t any speed limits in Texas.  Not that I know this from personal experience, I don’t, I swear.

But, I digress… I’m headed out and technically I’m speeding, but only by about 9 miles over, cause you know – 10 miles over is just too fast and I do have my limits!

That’s when I saw him coming at me, going west as I was travelling east.  A lovely black and white car that never fails to make my heart rate pick up. 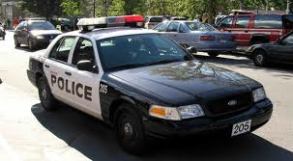 Not the actual car that was coming at me… I’m sure he really would have had an issue if he saw me taking a picture of him whilst I was driving!

I noticed his arm out the window, and then I noticed it was moving, and then I realized he was giving me the thumbs down as he was telling me to slow down.

Dude, I burst into giggles, composed myself as we passed and I gave him the nod and let me tell you – I slowed down! I didn’t speed (much) the rest of the drive.

I did however giggle for the next five minutes and since after that cop car I saw another one a few cars behind him, I gave thanks for whoever was in trouble back in my neighborhood – cause it quickly dawned on me that they were the back up and he didn’t have time to stop me and give me a ticket.

For the record, after my meeting when I was driving home it was at a reduced speed.  Okay, it was somewhat reduced but with my eyes peeled more than usual.

This is how I felt on the drive home… always on the look-out!