It has been over 20 years since we started hosting the annual Family Reunion – I’m not sure how long exactly, but I know that we’ve held the annual family reunion since well before Mr. T was born. 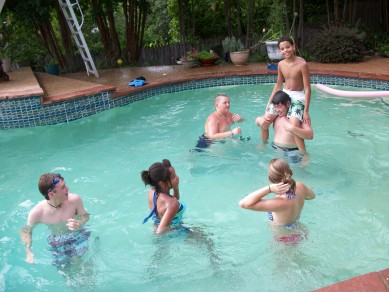 How the back yard at my parents looks most of the day of the reunion. There is my cousin Hunter, my niece Sam, cousin Katie, Mr. T and my nephew Jayman on the shoulders of Lee.

It is always a good time.  Mom and dad buy the meats through out the year and freeze them, and the days before the reunion arrive you can’t step near their sink without seeing it overflow with goodies defrosting and getting read for Dad’s magical hands. My dad’s ribs are the best.  You can’t eat just one.  He will also BBQ some chicken legs, hot links, sausage, a couple of boneless skinless chicken breasts (for yours truly) and a big slab of bologna.  I learned just earlier this year that not everyone has had BBQ bologna.  It boggles my mind.  Really, stop what you are doing, go to the deli and get them to cut you off about 6″ of bologna.  Go back home, fire up the grill, score some deep slices in the bologna, about every 2″ and then dump some BBQ sauce on it, getting it into the slices and then double wrap it in foil.  Then add another layer of foil.  Go ahead and put another layer on there – better safe than sorry.  Dump that sucker on the grill and just rotate it occasionally.  When you take it off the grill it will be nice and BBQ’d and you will be in heaven.  Trust me on this.

Totally used without any of their permissions – but since they don’t read my blog, I figure I’m safe. That’s my dad in the hat and patriotic shirt. 🙂 My cousin Matt is in blue and loading up his plate from the chafing dish just overflowing with BBQ.

Anyway… We have the chafing dishes out and dad just comes in and dumps meat inside them.  Mom and I will put together several different salads and sides and desserts.  Friends and family will come from far and wide and usually bring a side with them, either fresh peaches from Fredericksburg, or the best cheese roll and crackers you have ever tasted.

We all pig out and catch up with each other.  You can cycle through the living room, kitchen and back yard and see your relatives and friends.  You can sit and have some fresh iced tea or do a cannon ball into the pool.  We graze all day and spend quality time with each other.  There are several family members that the only time I see them is at the reunion! 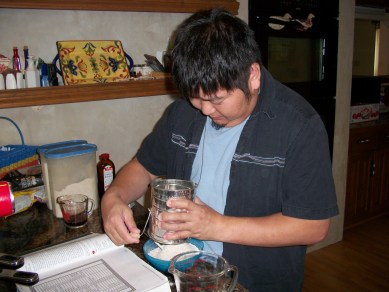 Lee whipping up a batch of cookies for us a few years ago – chaos all around him and kids underfoot, but he’s calming sifting – and refusing to look at the camera!

This will be the first year without Lee there, making cookies or entertaining kids in the pool. It was this time last year that we thought he was fighting bronchitis, and eventually found out it was congestive heart failure.  We had less than a year with him after he was diagnosed, and this will be the first major family gathering that I will look around and expect to see him, and he won’t be there. 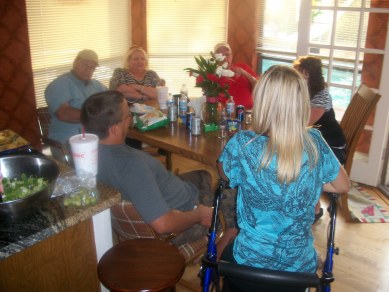 He won’t walk around the corner and give me a look.  And he won’t be sitting next to me at the kitchen table as we scrape out the insides of Oreos so that we can use the outsides to make the best homemade ice cream you have ever tasted.  He won’t laugh every time I eat the inside instead of putting it on the “discard” plate. What?  Like I’m the only one that does that! 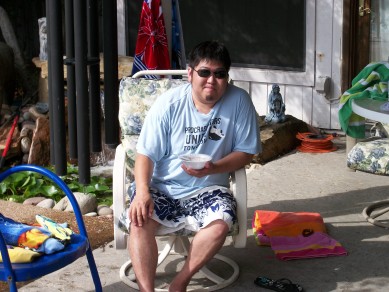 But, he will be there in spirit, cause even he knows it’s the party not to be missed!