I’m starving.  I’ve lived with being starving for months now.  And, when I can eat, I have, which is probably why despite the fact that I’ve seriously reduced my intake I haven’t actually lost more than a pound or two! But, that’s okay.  I’ve told you before and I’ll say it again – as soon as all my tooth work is over, I’m going out and eating everything off the menu at my favorite spot.  And I mean everything!

Today I had impressions done for my permanent bridge.  It’s more invasive than you think. We tried to get these impressions at my last appointment; however, after five tries, we still didn’t have it and the doc knew that it just wasn’t happening and we rescheduled. Today went much better!

So, while I’m sitting here with an aching mouth wondering how many pain pills I can take before it becomes excessive, I figured I’d share a great entree I’ve made a couple of times.  Mr. T loves this and I have a feeling I’ll be making them for quite a bit longer!

I diced up some onion and bell pepper and grated a bit of garlic in there and got it started on the stove.

Then I gathered the rest of the ingredients. Some spray butter for the flour tortillas. This gives me nice even coverage. I have pepper jack cheese shown, because this time T and I wanted some spice, but I’ve also made it with queso blanco shredded cheese and that was nice and rich.

I added some lemon and a couple pats of butter and then dropped in some small shrimp. It only takes a few minutes to cook and so I preheat the skillet pan while the shrimp is cooking.

This is Shorty keeping me company while I cook. He’s also secretly hoping I’ll drop some cheese or a shrimp. Both of which have happened…

I spray the flour tortilla with butter and drop it on the skillet, top it with cheese and when the cheese starts to melt, I spoon on the shrimp. Usually a couple of big tablespoons full. Then I top it with the other tortilla and spray it with butter and flip it over. It was during one of these flips that a shrimp went flying and I discovered that Shorty does like shrimp! 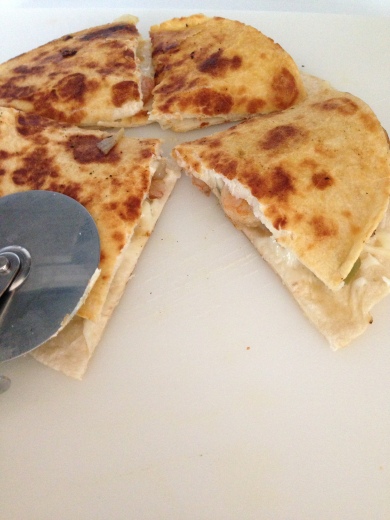 Once it’s nice and toasty, I drop it on the cutting board and get out my pizza cutter and make four nice little slices.

Spray, stuff and repeat until they are all done! In the mean time I steamed some broccoli and then fixed our plates.

Short of the fact that I stand there like an assembly line – it really is fast and easy and so very tasty!  We had this a few weeks ago and I had it back on the list of meals for the next couple of weeks.  Mr. T was looking at the list and he goes “Hey, can we have shrimp quesadillas soon?”  Well, of course we can!