I had a busy weekend!

Mr. T and I got up and drove to Dallas.  I took the wrong toll-way.  This is not surprising since there is insane construction at the exchange and I was arguing with the GPS.

This is the GPS I was arguing with for part of the trip. Mr. T was a great navigator, though! (See the hand still messed up?)

First, we went to visit Erica and meet her new baby Landon.  He is so cute!  I love babies.

I was more focused on holding the phone properly than I was smiling… but T taught me that the volume button takes pictures! I didn’t know that!

Her daughter Em playing around with me and the camera! 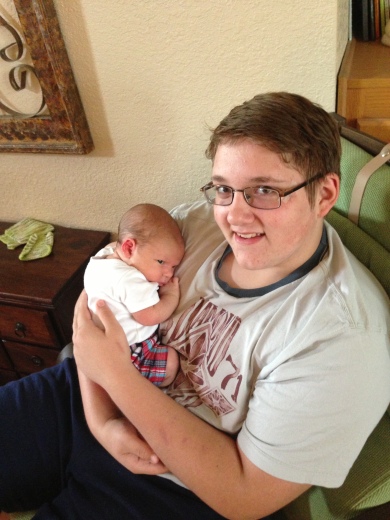 My baby holding her baby. I just love this picture. (You can barely see the steri strips still holding the gash by his eye closed!)

Mr. T and I stopped for lunch, and I took a picture and beamed it to Erica cause I knew there was a Taco Casa by her house, she just hadn’t found it yet.  I don’t think the rest of the country (and Canada) has Taco Casa, and I’m okay with that, cause it just means more for me!!!

You don’t know what you are missing!!

After fueling up our bodies, we headed downtown to Fair Park.  A few months ago I bought us tickets to Wicked, the musical.  I splurged and spent the $15 for a ticket for valet, too.  So worth the $15!! I loved being able to just get out of the car and not worry about finding a place to park!

Mr. T and I eventually found our seats. 🙂

The view from our seats.  We were pretty high up, but we had a clear view of the stage so that was really nice.

Mom and dad saw this play on Broadway and both really liked it, and T and I have been looking forward to this for months.  It was so very good!!  I was reading the Playbill and several of the cast members were from the original Broadway cast, so that was pretty cool!

Now, just minutes before the show started mom texted me that Lee was out of surgery, so several hours later, and as long as we were already in Dallas, Mr. T and I stopped by the hospital to say hi to them.  What I didn’t know was that as soon as Lee was out of surgery and back in his room, something went wrong and they had taken him right back to the OR.  We arrived just as he was getting back to his room, again.  So, we waited.  Eventually mom and dad got to go back to his room to see him and then dad came and got T and I and we went back to see him.  Bless his pea-picking heart.  Poor guy has been put through the wringer. He was taken back originally that morning because his LVAD clogged up.  They put on a new LVAD, removed the RVAD and put him on ECMO.  As soon as he got back to his room they discovered that the LVAD and ECMO were not synced up properly, so they took him back.  Lee is the first patient that they have done the LVAD and ECMO at the same time.  Have I told you that yet?

Anyway… after seeing him and hugging mom and dad, we made the long drive back home.

We got back to our side of the world and ran by my parents house to gather up some things they needed and left them for my Uncle to pick up and take to them.  That was when Mr. T and I decided we were hungry again!  It was dinner time after all!

My view from the dinner table!

We enjoyed a nice dinner out – and I had a coupon for a free dessert!  The restaurant doubled the dessert!! Instead of one serving, they put two on the same plate – so we didn’t really have to share – we got our own!  It was the perfect way to end the very busy day!

Sunday I rested.  A lot. Well, I did laundry.  I cleaned the kitchen and my bathroom.  I pulled a lot of weeds.  But otherwise, I rested.  My buddy BA came over and helped with the yard work and mowed, weed eated and trimmed the big bush up front.  I felt so much better once that was done.  I was too physically wiped out to do it and with T injured, there was no way.  So, I’m glad that I have great friends like that who can help out.  He stayed and had dinner with us, and we laughed and had a good time.  It was the perfect way to end the day.

It was a good weekend.  And I highly recommend Wicked – and Taco Casa!

11 thoughts on “My Wicked Weekend in Pictures”