First off, since this is my blog, let me tell you that I’m exhausted and I really, really hate the smell of the hospital.  You know that smell, it’s not bad… it just hits you at the back of the throat and never lets you go.

Also, my brother is super cranky.  He was cranky to me yesterday, and he’s been cranky towards mom for days now, but today, today he took home the crankiest boy in the world medal. I could hear in my head the announcer going “And the winner is… Lee!”

I’m not very patient to begin with, but I do make allowances.  I recognized that it completely and totally sucks to, in effect, be tied down to a hospital bed by all of the lines running in and out of your body.  I can see the frustration and angst on his face that he can’t get up and walk to the toilet.  I get that it’s not ideal.  As such, I’ll give you a lot of leeway.  I’ll take the abuse and shrug it off.  Until today.  Today I snapped.  Today he was frustrated about not being able to get up to go to the bathroom.  Bed pans suck.  We get that.  But, it is physically impossible for him to get up, it sends his heart rate skyrocketing and causes the CRRT machine to clog.  We all want him to get up, but it was just not physically possible this morning.  This set him off and he went on a tirade and had him sending angry texts to mom and when he finished with his doctors were all stupid, well, yeah, I’d had enough.

We had a come to Jesus meeting and I told him that we all sympathized and it totally sucked and yes, as much as we hate that he is going through this, I don’t know that the rest of us could do it in his place.  I told him that it was going to continue to suck until it got better and he could lay there and be miserable and make the rest of us miserable, or he could knock it off and deal with it.  It is what it is and being miserable about it doesn’t help.  Making the rest of us miserable doesn’t help.   Yes, the progress is slow.  That is all we are hearing – it’s slow, but it’s progress. Yes, we hear it everyday, and yes, it drives us nuts too, but we would so much rather heat that every single day as opposed to hearing the opposite.

Y’all, I’m not sure what all I said, it kinda went by in a blur.  And when his nurse stepped out of the room at the end of my speech, I pointed out to him that he has excellent doctors and nurses who were doing everything in their power to help him heal and get better and out of that bed, and that they were doing it all despite the fact that he was treating them like crap frequently.

He got silent, and when I reminded him that he had morphine if he was still struggling, he said yes this time, and took a hit.  And the next time he talked to the nurse, he was polite and said thank you.  So, I don’t know if I got through or if he just didn’t want another fast lecture!

I’m not the best in those situations.  Our mom is better at it – the whole being patient and coddling thing.  She is great at that and has handled him very well.  I must have gotten impatient and left the line the day that genetic marker was being passed out… I just don’t have it.  I’ll nurture and have compassion… to a certain point! 🙂

Now for the positives of the day: he was taken off of this one specific med and he tolerated the removal, he stayed stable for an hour which meant… He was removed from the CRRT machine (dialysis)!!! Yay!  This is a huge step to have him off of the CRRT.  The goal now is to last all night and then see what the labs show in the morning.  Without the CRRT cleaning his blood, we should have a much more accurate measure of what is going on inside him.  Just like in the past couple of days, his labs were all over the place, up here and down there.  So, it will be good to see how his body behaves overnight.

Now, before we get our hopes up, the CRRT is going to be close by, as the nephrologist thinks that he may need some “sled” treatments.  They’ll hook him up for 2-4 hours a day just to help his body out.  That is the goal we are working towards – that IF he needs help, he only needs a little at a time.

I left early to have my root canal finished, and mom said that he was stable, but that he just didn’t feel very well.

Let me just say that I’m glad she’s there and not me.  Maybe he’ll be able to sleep better tonight and he’ll be in a happy happy joy joy mood tomorrow.  Maybe. 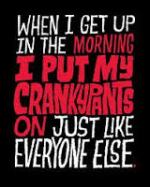